Re/Place - Stories that are right up your street #2 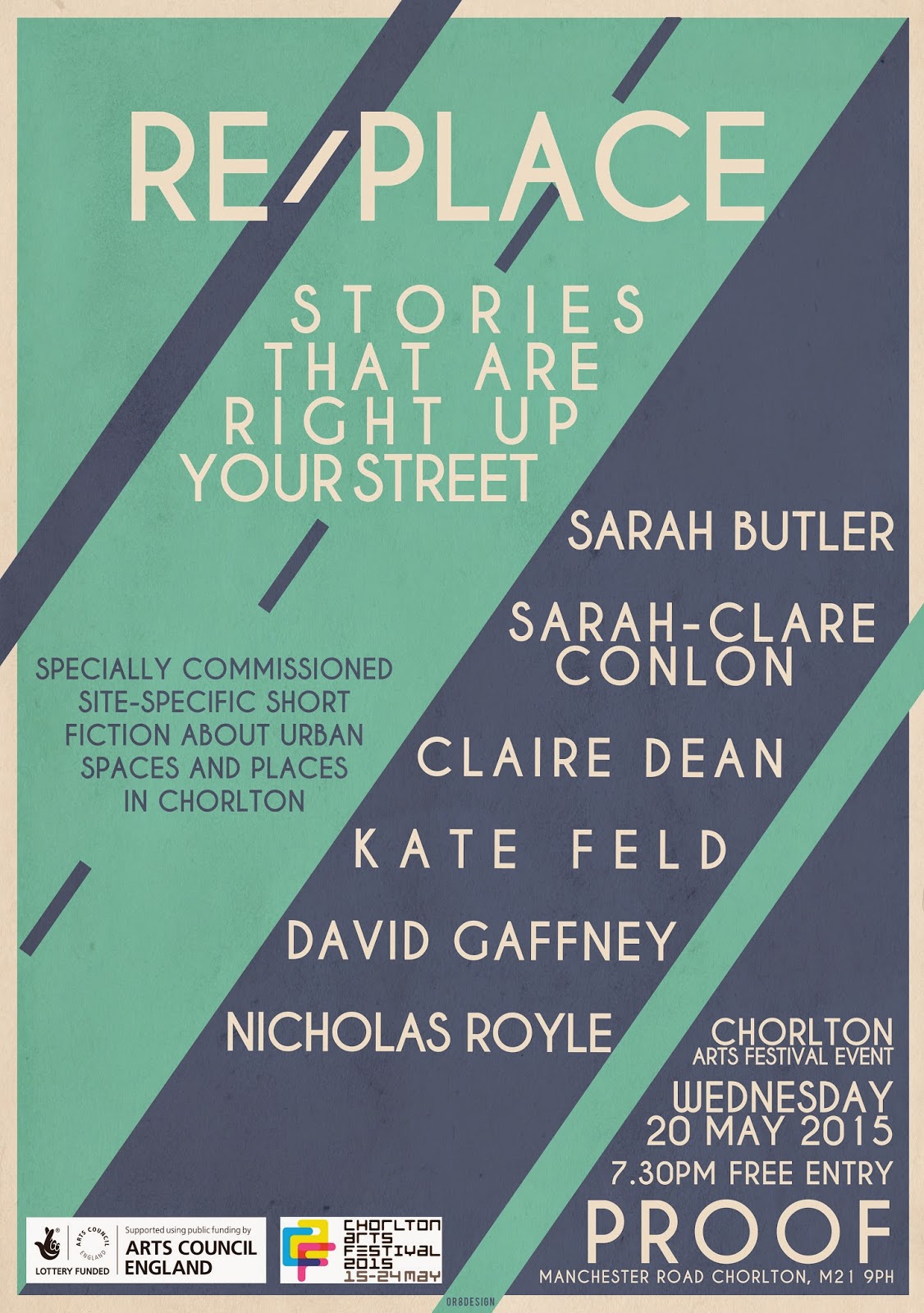 My latest site-specic project is this: Re/Place - Stories that are right up your street.

Always wanted to go behind the scenes in Longford Cinema or Cosgrove Hall? Ever wondered what the Sedge Lynn used to be or why Chorltonville is unique? Never knew about the Chorlton Park paddling pool or what happened to the Chorlton Green church whose graveyard and lych gate still remain?

As part of Chorlton Arts Festival 2015, six critically acclaimed and award-winning writers each sharing an interest in psychogeography and urban exploration have penned pieces about ghost places and the re-appropriation of spaces. Sarah Butler, Sarah-Clare Conlon, Claire Dean, Kate Feld, David Gaffney and Nicholas Royle will perform their site-specific short stories and present postcards from the past at this special event. Supported by Arts Council England.

Contact me if you have your own stories to share: sarahclareconlon@gmail.com - we'd love to hear from you and incorporate them if we can.

Posted by Site Specific Stories at 01:33 No comments:

I was at Cornerhouse on the last official day of business, Thursday, and noticed the bicycle stands had been flyered. How apt - my Micro Commission was all about flyering the bikes, so it was a nice little reminder! Just thought I'd share. Back soon with more on the Re/Place project for Chorlton Arts Festival 2015. 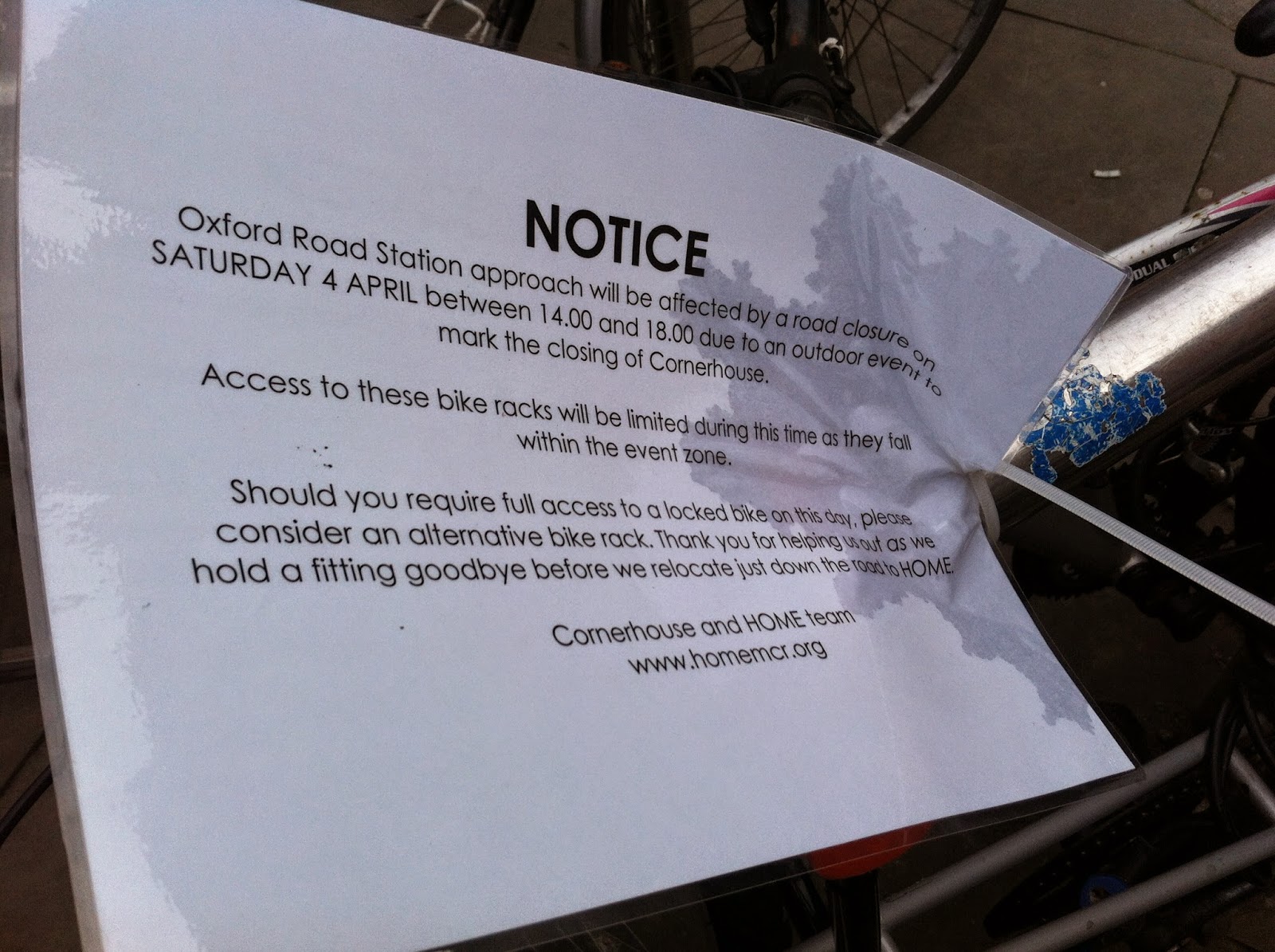 Posted by Site Specific Stories at 17:45 No comments:

Re/place: Stories that are right up your street

There's exciting news from Site Specific Stories: we are currently planning a new project, called Re/place, for this year's Chorlton Arts Festival, which takes place in May. More on that soon, just wanted to whet your whistles!

Posted by Site Specific Stories at 21:20 No comments:

Last night, I made a pitstop at Cornerhouse and had great trouble finding a parking space for Hettie. How delightful! I've never seen the bike stands so full, all of them tripled up (I have a feeling that Boyhood might be quite popular).


It reminded me of Micro Commission: Flyer Fiction, and I suddenly realised that I worked on that project exactly a year ago this gone weekend. It also reminded me that I set myself some homework here, which the dog consequently ate. Maybe I'll get back to it at some point…

Posted by Site Specific Stories at 14:58 No comments:

During my final Micro Commission stint at Cornerhouse, on the Monday evening, I was interviewed by the editor of Tusk Journal, Alex. A keen cyclist himself (though unfortunately currently out of the saddle following an accident), he was really interested to know more about the Flyer Fiction project and the idea of using steeds as the inspiration for short stories, and he's just published part of our conversation on the Tusk website, which you can read here.
Posted by Site Specific Stories at 13:09 No comments:

Monday, 8pm-11pm, Flyer Fiction 4: What Goes Around, Comes Around

I'd picked Monday for the late evening part of the project, as it coincided with Cornerhouse's popular Reel Deal offer, so I thought there might be some interesting people knocking about. The first thing I saw was a girl trying to bring her bike into the foyer, something I've never seen before! Not surprisingly, she didn't succeed, but she did manage to make her way into the fourth and final story. This one's about a fixie - I'd spotted a few as the days passed and on Monday a really cool fixie rocked up, albeit very briefly, so that became the steed of the story. It tells a true-life tale of a friend of mine who left a bike unlocked outside a shop and was surprised to come out and find that it had mysteriously disappeared - still, the brakes didn't work and he only liked the pedals, hence that mention in the piece. His bike didn't reappear, however, but I wanted to bring the idea of karma into the piece, as I'd got some stick the day before, and was thinking about the idea of whether what goes around does come around.


What Goes Around, Comes Around
By Sarah-Clare Conlon

It probably hadn't been the brightest idea to leave your fancy fixie outside unattended while you nipped into the gallery to pick up the latest brochure. But the security guard wouldn't let you drag it across the freshly polished parquet and you were going to pop in and out quick-sharp, so you leant it against the chrome hoops, hidden within the melée of other bikes.

The trouble was, you knew too many people, and you were instantly spotted sneaking in and trying to streak back out. A former colleague collared you, the strangely over-excitable bloke from accounts who could never be quietened once he'd found his flow. And he found his flow easily. You nodded politely at his updates, jigging slightly from foot to foot, and eventually you managed to make your excuses and escape into the blinding glare of the sun. Your eyes straight away made out quite clearly the shape of what was missing. It was such a shame; you'd particularly loved those pedals, so aesthetically pleasing.

Then, while sulkily riding the sweaty bus home, you clocked your bike propped outside a shop and you dived off as passengers were pushing their way on board. Your legs had never pumped so fast as you made your getaway and pondered the chances of karma. Listening to the woes of others would only make you a stronger person.
Posted by Site Specific Stories at 23:00 No comments:

Things were even quieter when I arrived on Sunday, but that was to be expected. As I was doing my observations (and eating brunch), a dapper chap arrived on a vintage blue bike with lovely old dynamo lights, which was great as I'd already decided to use Sunday's Tweed Ride as inspiration. This is a jolly jaunt around Manchester, everyone in their finery, and this meet had been arranged as a result of the fine weather. As I know the people who had organised it, I asked them to wend their way past Cornerhouse en route to Platt Fields, and they very nicely obliged! Another friend dropped in to say hello and a lady came over and asked if I was "the flash fiction writer" and we had a chat about the project, so she's also made her way into the story.


I Say Old Chap, What's All This About Then?
By Sarah-Clare Conlon

Claude and Camille were the democratically elected leaders of Tweed Ride – no one else had the time to organise the route what with all their brogue-polishing and floral frock-ironing. The brother and sister duo would spend sunny Sundays studying satellite shots of the city, devising suitable point-to-points for their sartorially savvy cycling pals, then disseminating the details via thoroughly modern means. The stylish steeds and their masterly tweeds would then gather at a pre-determined destination for a pre-dérive drink, before pushing off for a potter around culturally significant venues.

Often, they met at the arthouse cinema; Claude and Camille snagging their Pashleys together while they enjoyed eggs Benedict and Croque Monsieur, and waited for the others. There was Jonathan with his tandem, Ella with her apple-green step-through, Rob with his Harris flatcap, the plus-fours guy; the girl with the I Heart My Bike bell. Trundling around town, the mass attracted attention, and that was the point: promoting cycling for the chic and cheerful. Folk waved from pavement cafés, the people's paparazzi snapped the passing posse on smart phones. The Urbis youth looked on, not computing this weird alternative tribe. You've all got moustaches, they shrieked at the men mosying along. The women smiled at the men. The men smiled secretly, and kept on pedalling.
Posted by Site Specific Stories at 14:00 No comments:

Site Specific Stories
Site Specific Stories is a guerrilla writing project. Short stories are left in places you wouldn't expect, like library books or magazines in dentists' waiting rooms or phone directories in bars or under car windscreen wipers. You may have found one. Aren't you lucky? This website gives you some more info and images, and records how each story develops and if anyone interacts after a fictionbombing. For updates and other stuff, follow @wordsnfixtures on Twitter. All rights to stories remain with the author, Sarah-Clare Conlon.